To help you find the perfect digital pen, we continuously put forth the effort to update and expand our list of recommendable digital pens. Our team collects, edits and publishes new information, in order to present it to you in an accurate, significant and neatly arranged way.

❤ One Button Operation: One button starts the digital pen, no USB or Bluetooth connecti...

No need for gloves: Palm Rejection design allows you to rest your hand on the screen of...

Click and Go- Just one click to start, no APP or Bluetooth needed. What you need is to ...

【Pixel-Perfect Precision】With the upgraded pen tip, it is more durable and delivers pix...

【Compatibility】 This stylus pen is compatible for iOS/Android touchscreens. It can not ...

【No Need Setting Bluetooth】Are you annoyed with your stylus pen disconnecting from your...

EASY-TO-USE ACTIVE PEN - Experience pen-point accuracy with only 9g of pressure to edit...

CONTROL APPLICATION - Customize your pen controls with 2 personalized buttons for your ...

Do you prefer taking notes with a pen rather than typing them on your computer or mobile device? You aren't alone; studies suggest that the physical act of writing a note improves your ability to remember it later. As a result, some people swear by pen and paper and couldn't imagine taking notes any other way. We live in a digital world, though, and you may encounter situations in which you would like to share your handwritten notes or search for words or phrases within them. Those are just two of the features that many digital pens offer. Whether you're looking for a better note management solution -- or simply want an improved stylus for your favorite mobile device -- you can find the solution that you want with a great digital pen.
Digital pens vary greatly in their prices and in the features that they offer. These are some of the features that you might find when you shop for digital pens.

Some digital pens function primarily as styluses for tablets and smartphones. You might want a pen that doubles as a stylus if you use your device to create artwork or if you prefer to enter text by writing on the device rather than typing on a virtual keyboard.

When you draw on paper, you can vary the shading of your lines by adjusting the pressure of your pencil or other instrument. Many drawing tablets and other devices can enhance your digital artwork in the same way by responding to pressure changes. Often, though, it isn't the screen that records pressure data -- it's the stylus. If your device has a screen that responds to pressure changes -- or you use an art app that collects pressure data from a stylus -- you should look for a stylus with pressure sensitivity.

If you're content to use your finger when interfacing with mobile devices, you may want a digital pen that's more of a pen than a stylus -- something that enhances your ability to take notes and recall information. Smart pens use a variety of different technologies to achieve their goals, and the features that they offer are quite varied.

A great digital pen can enable you to get more out of your notes than ever before by converting those notes to digital files and moving them from one device to another. Digital pens track your movements in different ways. For example, the LiveScribe pen uses an infrared camera -- and special paper full of tiny dots -- to determine its position on the page. Other pens such as the Wacom Inkling use sensors rather than special paper. To use a pen with a sensor, you'll have to place the sensor on the page before writing.

Recording your pen strokes allows you to create digital copies of everything you write. The things that you can do with those digital copies are nearly endless. Depending on the digital pen you choose, you may have the ability to:

Many digital pens have the ability to create audio recordings of lectures or meetings. Digital pens that can record audio do so in one of two different ways. Some pens have internal flash memory and use built-in microphones for recording. Others use Bluetooth to link to your smartphone's memory and storage. A digital pen that relies on your phone for recording will produce better audio and will likely have more storage space to utilize. However, using a Bluetooth pen also means that you'll need to carry two devices when you want to record something.

If a digital pen has a recording function, it will most likely also provide a way for you to synchronize recordings with your computer or mobile devices. Some pens may also use language processing to allow you to search for words within audio recordings.

Ability to Link Notes With Recordings

If a digital pen tracks strokes and records audio, it can allow you to link recordings with your notes. Using a LiveScribe pen, for example, you can tap one of your notes on a LiveScribe page to hear the recording of what was taking place when you write the note. You can even tap the virtual buttons on the bottom of the page to bookmark sections of a recording, skip between bookmarks, pause playback and more.

If your digital pen has internal memory, it may give you the ability to install simple applications. For example, there is an app that allows you to use your digital pen as a calculator by tapping numbers on a page. You can also find simple games such as Hangman and travel apps that translate -- and teach you how to say -- common phrases in many of the world's most common languages. There is even a pen app that lets you compose music by drawing the notes in a page.

Although the features of most digital pens center around the ability to create, synchronize and share notes, there are also digital pens that enhance the process of creating art. For example, the Wacom Inkling allows you to import a sketch into your computer as a standard image file or as a vector file. The Inkling can transform your creative process by allowing you to create a piece of digital art that begins as a sketch on paper. Using the included sensor, you can even create complex projects with multiple layers.

If you're looking into finding the best rated digital pen, you should probable check out the MENKARWHY Active Stylus Pen. We looked at various sources of reviews and found this one to have the best mix between review count and average rating stars. 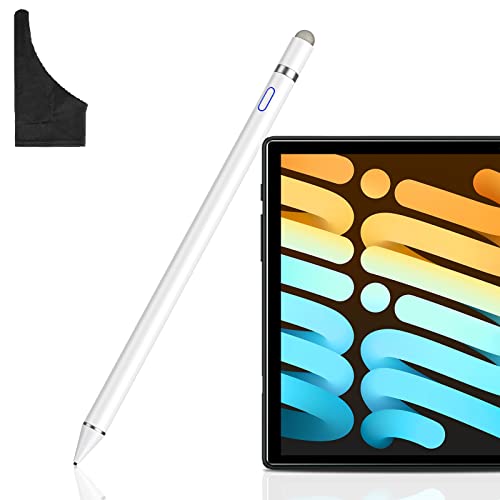 Often, going for the best price is a simple but good option. With a price of $14.99 (last checked this morning), we do not list any other digital pen cheaper than the MENKARWHY Active Stylus Pen. Just remember that it's not always the best option to go for the cheapest one.

The Digital Pen With the Most Reviews

With at least 0 reviews and counting, the MENKARWHY Active Stylus Pen might be another option to consider. This large amount of reviews signalizes that many people are using it, with most of them beeing satisfied.

It's quite rare that the saying "You get what you pay for" turns out incorrect. If you have the money on the sideline, feel free to choose the most expensive item from our list: The HP Rechargeable MPP 2.0 Tilt Pen currently sells for $53.71. The Digital Pen With the Most Clicks

If you trust us and our users, feel free to check out the MENKARWHY Active Stylus Pen. Our statistics say that it is the most favorite Digital Pen from the list above.

If you're still undecided, I would recommend that you go with the masses and choose the top selling digital pen: The MENKARWHY Active Stylus Pen is the hottest bestseller in this category right now.

There are no reviews on digital pens, yet.
Be the first to write a review, or check for additional reviews in the Further Reading section below.

Do you want to know more about digital pens? Check out the links below to gain knowledge about the whole topic of digital pen products.
Digital pen

A digital writing system according to one embodiment of the present invention captures handwritten gestures in addition to text and patterns. It may include, among other things, a digital pen, special erasable ink and paper, and application software for the managing of &#8230;

A digital pen that has an ink writing tip includes a laser on a pen body that directs light toward paper across which the writing tip is stroked. A CMOS camera or CCD is also mounted on the pen body for detecting reflections of the laser light, referred to as &#8220;speckles&#8221; &#8230;

Did you like this article about Digital Pen? Please rate it!

More Guides and Reviews in the Mobile Devices & Accessoires Section