To help you find the perfect led dimmer switch, we continuously put forth the effort to update and expand our list of recommendable led dimmer switches. Our team collects, edits and publishes new information, in order to present it to you in an accurate, significant and neatly arranged way.

Tested on 1,000s of bulbs and dozens of brands for flicker-free dimming. For list of re...

Works with up to 150 Watts of dimmable LED/CFL bulbs or 600 Watts of Incandescent/Halog...

View on Amazon
GE with Slide for Incandescent

Control – Dim and brighten the room as you wish with the easy slide dimmer that allows ...

3-Way Single Pole Compatible Slide control dimmer.If UP is off(DOWN is on) after wiring...

PEACE OF MIND: Set lights to automatically adjust with changing seasons so your family ...

CONTROL YOUR WAY: Caseta puts the smarts in the switch so you can control your lights a...

Gentle off - Tailor your lighting to fade on with a click of the switch or a double-cli...

Scheduling - Use Schedules to set your smart switch to automatically turn on and off wh...

LED lights are popular and energy efficient. Combining them with a dimmer switch makes them even more so.

This guide will help you understand the different types of lights and dimmers so that you can choose the right one for your needs. You will also find terms and their definitions so that you will be prepared to compare the different products available to you.
What is an LED Light?

LED stands for light emitting diode. These lights have come a long way in their development during the past few years and are now very popular because of the comfortable light they emit and their energy-saving features. Every indication is that they will continue to grow in popularity.

An LED emits light in a narrow light spectrum and is more energy-efficient than incandescent or fluorescent lights, which emit light in a larger spectrum. Phosphors within an LED light convert ultraviolet light to white light.

We can now buy LED bulbs that screw into the same light socket as the incandescent bulbs do.

Although LED bulbs can initially cost more, they are rated to last longer than any other bulb - up to 50,000 hours. If you use an LED light for 12 hours a day, it is expected to last 11 years.

LEDs can be used inside or outside. In fact, LEDs become even more energy efficient as the temperature drops.

LED lights are safe, emitting less UV (ultraviolet) radiation than any other type of bulb. They do not contain mercury, whereas the CFL fluorescent bulbs do.
What is a CFL Light?

A CFL (compact fluorescent light/lamp) is the spiral light that you often see in a regular incandescent socket. It is an energy-saving compact fluorescent tube/bulb, which contains a small amount of mercury vapor.
Most LED dimmer switches also work with CFL bulbs. If your room has these spiral bulbs, be sure the dimmer switch you buy indicates that it works with CFL bulbs.
How are LED Lights Different from Other Bulbs?

An LED light does not emit the amount of heat that in incandescent bulb does, therefore LEDs are safer.

If an incandescent or halogen bulb uses 50 watts, an LED will use less wattage to create the same amount of light.
Why LED Dimmer Switches Save You Money

Dimmer switches save energy because they turn down the voltage going to the bulb, thereby using less electricity. LEDs are already cost effective but if you combine an LED bulb with a dimmer switch, you save even more on your electric bill.
The Use of Dimmer Switches Allow You to Set the Ambient Mood of a Room

You can change the mood in your room with a dimmer switch. You can customize your home's lighting using LED dimmer switches.

Some dimmer switches have a fade-to-off feature that allows you to leave the room as the light fades out. This increases safety, since you are not immediately left in the dark. It also produces a quiet, mood-setting feeling.
What Does Single-Pole Mean?

Dimmer specification will indicate whether the switch is single-pole, 3-way or whatever. Understanding these terms will help you choose the right switch.

Common household switches are single-pole. The only setting they have is on and off, designed to control only one light.
What is a Three-Way Switch?

A three-way switch will control a light from two locations, such as a stairway light that can be turned on or off from either the top of the stairs or from the bottom.
Are All Dimmers Compatible with All Lights?

Dimmer switches need to be used with dimmable lights, whether LED, CFL, incandescent or halogen. When buying a dimmer switch, look at the specifications for the type of lights they work with. Sometimes wattage limits are listed as well.
Some Additional Points about the Dimming Capabilities

The proper way to use a dimmer switch is to use the slider or knob to set the brightness. Then use the on/off feature as you would for any light switch. In other words, don't use the dimmer feature to turn the light on and off.
Some dimmers, such as the Lutron Maestro CL, have a delayed-to-fade feature, which means the light will slowly fade out when you tap it. This allows you to leave the room before all the lighting is gone. This is a nice safely feature.
How Are Dimmers Operated?

Some dimmers are turned on and off with a switch, push button or by tapping a pad/plate.

Some dimmer switches control the brightness with a slider, knob or other method.
How do Dimmer Switches Compare?

Let's compare two LED dimmer switches so that you can get used to examining the specifications closely. This will help you determine which dimmer switch is best for your situation.
Keep in mind that you get what you pay for. Buy the best dimmer switch you can afford.
The following two dimmer switches are in the $25-$30 range:

[1] Lutron DVCL-153P-WH Diva Dimmer for CFL, LED, Halogen, and Incandescent Dimmable Bulbs, White
($27.77)
* This dimmer switch is compatible with 800+ bulbs.
* It is compatible with all incandescent and halogen bulbs.
* It can be used in single-pole or 3-way applications.
* This switch also works with all incandescent and halogen bulbs that are up to 600 watts.
* This dimmer uses a paddle switch to turn lights on and off or return lights to a preset level.
* A slider dims and brightens the light.
* It comes in a wide variety of colors, not just white.
* The wall plate for this dimmer switch is CW-1-HW and is sold separately.
[2] The Lutron MACL-153M-WH Maestro 150-Watt Multi-Location CFL/LED Digital Dimmer ($29.00)
* This dimmer switch is very similar to the one above, Here are the differences:
* It costs a few more dollars than the Diva Dimmer.
* It differs in that it can also be used in up to 10 locations where you want to be able to dim the lights.
* Tapping the switch turns it off and on to your favorite light level.
* Then a rocker dims and brightens the light to give you the mood you want.
* This unit has the safety fade-to-off feature, which gives you time to leave the room before all the light is gone.
* It comes in white.
* All other specifications are the same as the switch above.
How to Replace the Old Standard Switch with Your New Dimmer Switch

If you're looking into finding the best rated led dimmer switch, you should probable check out the Lutron Caseta Wireless Smart Lighting Switch. We looked at various sources of reviews and found this one to have the best mix between review count and average rating stars. Often, going for the best price is a simple but good option. With a price of $11.25 (last checked this morning), we do not list any other led dimmer switch cheaper than the GE with Slide for Incandescent. Just remember that it's not always the best option to go for the cheapest one. 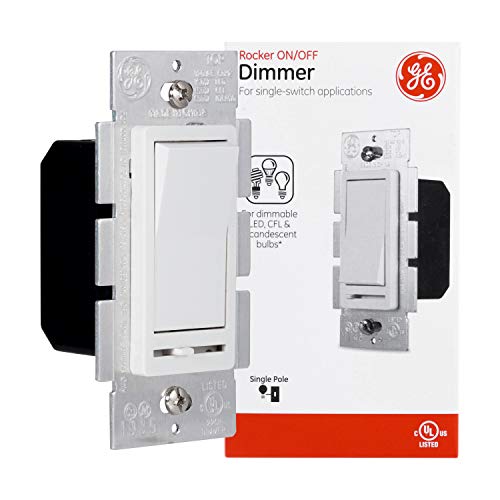 GE with Slide for Incandescent

The LED Dimmer Switch With the Most Reviews

With at least 2165 reviews and counting, the TP-Link Kasa Smart WiFi Light Switch might be another option to consider. This large amount of reviews signalizes that many people are using it, with most of them beeing satisfied. It's quite rare that the saying "You get what you pay for" turns out incorrect. If you have the money on the sideline, feel free to choose the most expensive item from our list: The [10 Pack] BESTTEN Light Switch currently sells for $88.89. The LED Dimmer Switch With the Most Clicks

If you trust us and our users, feel free to check out the Top Greener Inc ENERLITES Decorator Slide Switch. Our statistics say that it is the most favorite LED Dimmer Switch from the list above. If you're still undecided, I would recommend that you go with the masses and choose the top selling led dimmer switch: The Top Greener Inc ENERLITES Decorator Slide Switch is the hottest bestseller in this category right now.

There are no reviews on led dimmer switches, yet.
Be the first to write a review, or check for additional reviews in the Further Reading section below.

Did you like this article about LED Dimmer Switch? Please rate it!

More Guides and Reviews in the Consumer Electronics Section